Ian Rapoport of NFL Media reports that Patriots QB Jarrett Stidham is dealing with a hip injury that won’t be 100 percent for a few weeks. 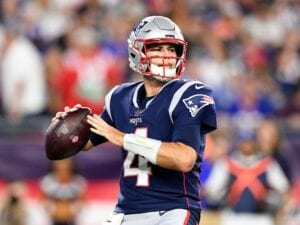 Rapoport says Stidham plans to fight through the issue, despite visiting with some doctors to get it checked out.

Stidham returned to the Patriots Friday morning and went through practice Friday, but had a much lighter workload than usual.

The Patriots have Stidham competing for the starting job with Cam Newton and Brian Hoyer this summer. Stidham had been struggling in recent days, throwing a number of interceptions during practice.

In 2019, Stidham appeared in three games for the Patriots and completed 2 of 4 passes for 14 yards and an interception.