Jeff Duncan is reporting that new Saints HC Dennis Allen will likely hire an external offensive coordinator rather than promote from within. 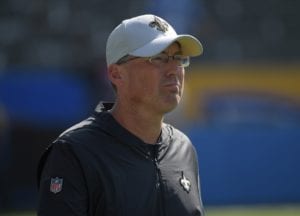 This is interesting considering that long-time Saints offensive coordinator Pete Carmichael is still on their staff. Duncan says that Carmichael is likely to remain with the team but in a different role.

Duncan expects there to be a lot of changes on the offensive staff under Allen.

As for defensive coordinator, Duncan says that Kris Richard and Ryan Nielsen are the two names to watch to takeover for Allen.

Carmichael, 50, began his coaching career back in 1994 at New Hampshire. His first NFL coaching experience came with the Browns in 2000 when he was hired as their TEs coach.

Carmichael worked for Washington and the Chargers before being hired by the Saints as their QBs coach in 2006. He worked his way up to offensive coordinator in 2009 and has remained in the post ever since.

We’ll have more regarding the Saints as the news is available.