Ian Rapoport of NFL Media reports that Raiders HC Jon Gruden and GM Mike Mayock sent their scouts home for the weekend and they’re not expected to return before draft time.

According to Rapoport, the belief is that the Raiders don’t know who to trust, talk to or confide in and wants to clear the room.

Rapoport goes on to say that there’s expected to be “significant turnover” in terms of the Raiders’ scouting department in the coming weeks/months.

The Raiders actually had a number of leaks last year and the expectation was that major changes were likely coming with a new GM in place.

Other teams send scouts home at this point, but they typically rejoin the team leading up to the draft.

The Raiders fired GM Reggie McKenzie back in January and brought in Mayock. There are still some holdovers from the prior scouting department that will be replaced after the draft. 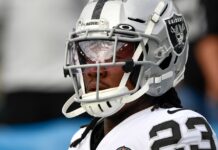