Adam Schefter of ESPN reports that an MRI has confirmed that Ravens RB J.K. Dobbins did, in fact, suffer a torn ACL and is out for the season.

According to Adam Schefter, Ravens RB J.K. Dobbins is still undergoing his MRI, but the expectation is the second-year back will miss the 2021 season with a knee injury. 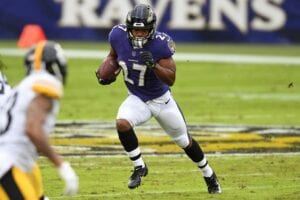 Jeff Zrebiec reported Dobbins had to be carted off the field and into the locker room during the preseason game vs. Washington.

He was caught between two players and his knee took a direct hit, bending backward.

If the MRI results are as bad as Baltimore thinks, it will be a huge blow to the Ravens offense, as Dobbins was looking like he would be one of their best offensive players.