According to Jeff Zrebiec, the Ravens have engaged in some trade talks involving fifth-round CB Shaun Wade. 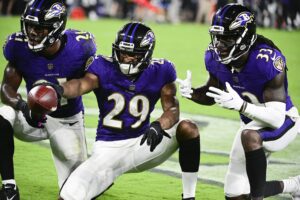 Baltimore just drafted Wade this past April and it’s unusual for teams to trade draft picks that quickly.

However, the Ravens are absolutely stacked at cornerback, and in terms of who’s ready to contribute in 2021, Wade might not stack up with other options.

Zrebiec adds the Ravens have also received inquiries about undrafted rookie Jake Verity. Ravens K Justin Tucker praised Verity this week and said he would be shocked if he’s not kicking for someone this year.

We’ll have more on the Ravens as the news is available.