According to Michael Cohen of the Detroit Free Press, the Ravens are targeting University of Michigan DC Mike Macdonald for their defensive coordinator job. 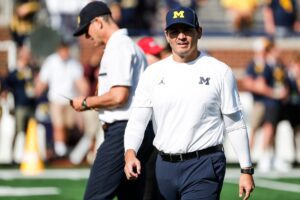 Macdonald, 34, began his college coaching career in 2010 as a graduate assistant at the University of Georgia and was promoted to defensive quality control coach from 2011-2013.

The University of Michigan hired him as their defensive coordinator last season.