According to Ian Rapoport, a realistic return date for Saints QB Drew Brees is in Week 15 against the Chiefs.

Rapoport adds Brees hopes to return a week earlier in Week 14 against the Eagles when he’s first eligible after being placed on injured reserve this past week.

Adam Schefter said “four to five weeks” was the consistent phrase that came up in talking with people close to the situation about how long Brees would be out.

Rapoport notes New Orleans wants to give the veteran time to heal up not only from nearly a dozen fractured ribs, but from a shoulder injury he’d been doing extra maintenance on before that.

A Week 15 return would give him a few games to tune up before the playoffs. Schefter also mentions there’s a widespread expectation that this is Brees’ final season.

We’ll have more on Brees as the news is available.

Drew Brees Dealing With 11 Rib Fractures, Still Hopeful He Can Return In Week 14 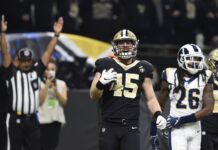