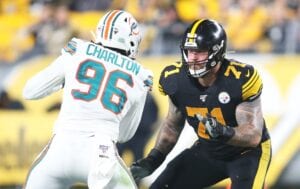 The Steelers placed a second-round tender on Feiler that will cost them $3.27 million for the 2020 season.

Feiler, 27, wound up signing on with the Texans as an undrafted free agent out of Bloomsburg back in 2014. He spent just over a year in Houston before being waived at the start fo the 2015 season and later signed to the Steelers’ practice squad.

Feiler has returned to the Steelers on four straight one-year contract extensions.

In 2019, Feiler started all 16 games for the Steelers and was rated by Pro Football Focus as the No. 20 overall offensive tackle out of 80 qualifying players.