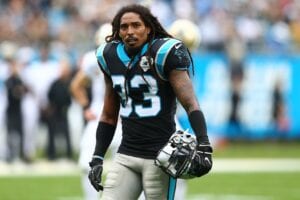 Boston later signed with the Chargers shortly after the 2017 draft. He agreed to a one-year contract with the Cardinals for the 2018 season before returning to the Panthers in 2019.

Carolina re-signed Boston to a three-year, $18 million contract last year, but released him in February.

In 2020, Boston appeared in all 16 games for the Panthers and recorded 95 tackles, one sack, an interception, a forced fumble, two recoveries and four passes defended.