Mike Florio of Pro Football Talk reports that the Browns and Pro Bowl CB Joe Haden have reached an agreement on a new contract that will keep him under team control though the 2019 season.

Haden’s contract will end up being a five-year deal worth over $68 million and $45 million “total guarantees.”

Reports had mentioned for months now that both sides wanted to have a deal in place before the start of the 2014 season. However, it appears as though they wanted to have an idea of what Sherman’s contract looked like before finalizing the details of the agreement.

Haden, 25, was entering the final year of his rookie contract and would have been without a doubt one of the best available players in next year’s free agent market. He would have made $6.678 million for the 2014 season.

Last year, Haden finished the 2013 season with 54 tackles, four interceptions — one of which for a touchdown — and 20 pass defenses.

Pro Football Focus had him rated as the No. 18 cornerback in the league last season. 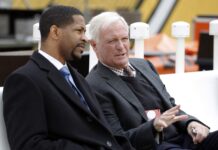 POLL: Which Team Made The Best Head Coach Hire?

152,152FansLike
7,623FollowersFollow
238,121FollowersFollow
© NFLTradeRumors.co is an independent news source and has no affiliation with the National Football League (NFL), NFL.com, or any team(s).
wpDiscuz