Mike Garafolo of NFL Media reports that 49ers WR Jalen Hurd is undergoing an MRI morning after suffering what is believed to be a “major knee injury” during Sunday’s practice. 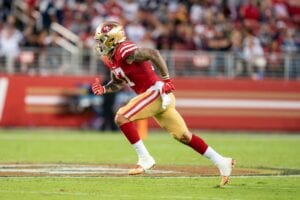 According to Garafolo, the fear is that Hurd suffered a torn ACL, which would cost him the entire 2020 season.

Matt Barrows notes that Hurd was running by himself on the side of the field when he went down in a heap yesterday.

Unfortunately, Hurd suffered a back injury last year that led to him being placed on injured reserve.

We’ll have more regarding Hurd as the news is available.