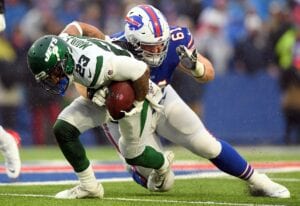 Long was set to make base salaries of $3 million and $6.25 million over the next two years of the agreement when the Jets released him in 2019. He signed a three-year, $15 million deal with the Bills.

Buffalo elected to release him last week after exercising his option back in March. Long just recently signed on with the 49ers.

In 2019, Long appeared in 14 games for the Bills as a reserve offensive lineman.