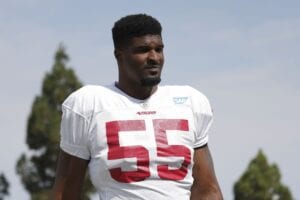 Ford, 29, was taken with the No. 23 overall pick by the Chiefs back in 2014. He was in the final year of his four-year, $8.158 million rookie contract when the Chiefs picked up his fifth-year option and later traded him to the 49ers for a 2020 second-round pick.

186,384FansLike
7,623FollowersFollow
275,701FollowersFollow
© NFLTradeRumors.co is an independent news source and has no affiliation with the National Football League (NFL), NFL.com, or any team(s).
wpDiscuz