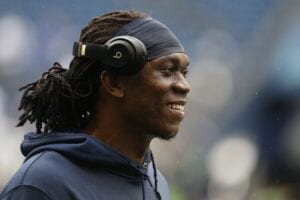 The 49ers also elevated WR Kevin White and CB Brian Allen to their active roster. Both players will revert back to the practice squad on Monday.

Ansah, 31, was taken with the No. 5 overall pick by the Lions back in 2013. He played out the final year of his four-year, $18.595 million rookie contract before the Lions picked up his fifth-year option.

Ansah made a base salary $12.7 million for the 2017 season before the Lions used the franchise tag that cost them around $17.5 million fully guaranteed for the 2018 season. He left after the year and signed a one-year deal with the Seahawks for the 2019 season.

The 49ers signed Ansah to a contract a few weeks ago.

In 2020, Ansah appeared in two games for the 49ers but did not record a statistic.

Williams, 29 wound up signing on with the Browns as an undrafted free agent out of Pittsburgh back in 2014. He was in the final year of his three-year, $1.53 million contract when the Browns cut him loose during the preseason as they trimmed their roster down to 75 players.

Williams was later claimed off of waivers by the Bears, but he failed a physical due to his ankle injury and was cut loose a day later. The 49ers signed him to a one-year, $765,000 contract in February, 2017, before later signing him to a three-year extension at the start of the regular season.

San Francisco picked up Williams’ option this past offseason.