Aaron Wilson of the National Football Post reports that the 49ers brought in three defensive backs for workouts on Wednesday including Chykie Brown, Buddy Jackson and Brandon McGee.

Brown, 28, is a former fifth round pick of the Ravens back in 2011. He spent a little over three years in Baltimore before he was waived and later claimed by the Giants.

New York elected to release him with an injury settlement at the start of the regular season, but he’s found limited interest since becoming available.

In 2014, Brown appeared in 15 games and recorded 40 tackles and two pass defenses for the Giants.

McGee, 24, was taken by the Rams in the fifth round of the 2013 NFL draft. He was unfortunately among the team’s roster cuts over to a month ago, but later returned to the team’s practice squad. St. Louis elected to cut him loose again a close to a month ago.

McGee wound up signing to the Giants’ practice squad, but his stay was short lived.

This season, McGee has been active for one game, but has yet to record a statistic. 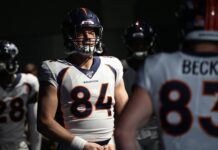