“I don’t think we have that taste out of our mind at all,” OT Fred Johnson said, via Kelsey Conway. “Joe still has a scar on his knee. I see it every day and I wasn’t even playing that game. It’s just something that is in the back of our minds, ‘Alright, we can’t allow this to occur again.’ He’s putting his trust in us, we need to let him have his faith and have his confidence in this offensive line unit.”

Bengals OL coach Frank Pollack, who was hired to help fix the team’s blocking woes, has been preaching fundamentals and technique, which has been resonating with his group.

“Technique has to be to a T of what Pollack wants,” Jordan said. “If you don’t do it and you know you didn’t do it, you go into meetings resenting when he’s going to try and correct you. So you try and do everything right the first time.”

Pollack is hoping that the new mindset will ultimately lead to a shift in team success, keeping Burrow upright and healthy, while also carving out lanes for RB Joe Mixon.

While second-round OL Jackson Carman has struggled and has not grabbed a starting spot at guard, fourth-round OT D’Ante Smith, who the team expected to be a developmental project at tackle, has looked more capable than expected at guard. He’s gotten to the point where he’s taken some first-team reps in practice.

“I think everything’s out on the table at this point,” Bengals OC Brian Callahan said via the Athletic’s Paul Dehner Jr. “We’re trying to find the best five guys we can to start come Week 1. D’Ante had a nice showing to start out. He’s a young player and made a lot of young player mistakes, technique-wise and targeting, things like that, but as far as raw ability and getting off the ball and climbing to the second level and getting on guys and covering them up, really positive first step for D’Ante playing a position he hasn’t played a lot. He’s going to keep getting those reps and keep competing.”

“He’s Yoda, man. He’s like Yoda,” Oweh said, via Pro Football Talk. “He just knows everything, and I try to ask him questions about different sets, how to approach that, how to attack that, and he’ll have the answer right away. I really appreciate that, because like I said, I’m new to the game, so I’m trying to pick up something different every single time. I try to work with him after practice — hands, just learning. Learning stuff and picking every little thing. With film too, how to take care of your body — just that vet mentality, being a pro and everything. So, he’s really helped me with everything.”

Steelers DC Keith Butler mentioned he’s hopeful the organization gets an extension done with OLB T.J. Watt in order to keep him happy, 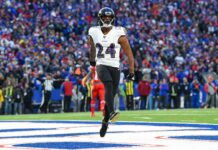