Browns DE Myles Garrett told Jenna Laine of ESPN that he sees a lot of similarities between his team and the Golden State Warriors back when they were on the cusp of becoming a dynasty.

“They had that young group of guys,” Garrett said. “You could tell they could play at that young age. You just had to mold them. I think Freddie [Kitchens] is gonna do that for us.”

New Raiders GM Mike Mayock inherited a plethora of needs. But defensive end might be at the top.

“Are we focused in on defensive ends at [the Senior Bowl]? Of course,” Mayock said via Scott Bair of NBC Sports. “We’d be dumb if we weren’t. But we need pretty much everything on defense. We’re looking at every position.”

Shelby Harris Would “Love” To Re-Sign With Broncos, But Admits Money Will Be A Deciding Factor 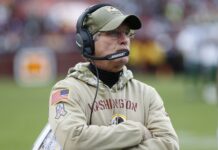 160,857FansLike
7,623FollowersFollow
243,509FollowersFollow
© NFLTradeRumors.co is an independent news source and has no affiliation with the National Football League (NFL), NFL.com, or any team(s).
wpDiscuz