An anonymous NFL head coach tells Matt Lombardo of FanSided that he believes that Steelers’ LB Bud Dupree could be the steal of free agency this offseason, but it will obviously depend on how he recovers from the torn ACL he suffered.

“Bud Dupree is someone that is a real question mark for me,” the anonymous coach said. “If he was healthy, he’s easily the top pass-rusher hitting the open market, and teams would pay a king’s ransom to sign him. But, with him coming off a torn ACL, what exactly are you committing to? Does he want to go back to Pittsburgh? Who knows, but he’s someone that I think will wind up having to wait a while to sign.” 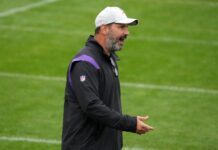