The Patriots’ 2021 season came to a crashing halt on Saturday night, as New England suffered its worst playoff loss in team history at the hands of the Bills, 47-17. Patriots HC Bill Belichick acknowledged there will be some hard questions the team has to ask of itself this offseason as it moves forward.

“We have to take a good long look again not just at one game, but all 18,” Belichick said via NFL Media’s Jeremy Bergman. “You could argue there were elements in last night’s game in some other games. But you’re right: Last night’s game was the least competitive game that we played last year. Is that what we are or is that a bad night? We’ll see when we start playing next year, I guess.”

Patriots first-round QB Mac Jones has high expectations for himself and for New England in the future as they move forward following his rookie season.

“I think you get more comfortable with anything you do in life,” Jones said via NESN’s Zack Cox. “I always relate it back to being a pilot. Like, if you’re a pilot and you’ve only flown so many times, by the time you have hundreds of flight hours, it’s just an everyday thing for you. So for me, obviously I was a rookie, and I played like that sometimes, and I shouldn’t have.

“I can play better, and that’s my goal this offseason: to advance and bring the guys along with me. We have great players all around me, and I know we have a lot of progress to make, and I’ll just feel more comfortable with anything you do a second time around — schedule, routine, everything. There’s no excuses, but there’s a lot that goes into it besides one thing.” 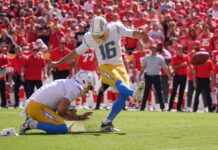 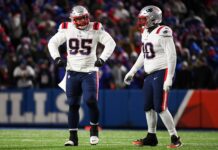