According to Adam Schefter, Antonio Brown’s one-year deal with the Buccaneers is worth up to $2.5 million and includes a $750,000 bonus for a Super Bowl win, and three $250,000 bonuses — one for receptions, one for yards and one for TDs.

The Browns remaining $1 million is from base salary and roster bonuses.

Schefter says this contract is expected to be official on Monday.

Ian Rapoport of NFL Media reports that the Buccaneers have finalized a one-year contract on Saturday with WR Antonio Brown.

According to Rapoport, Brown will make “slightly over the minimum” with a chance to earn more through incentives that include personal and playoff incentives.

Adam Schefter reports that Antonio Brown and the Buccaneers have reached an agreement on a one-year deal.

Schefter adds that contract language still has to be finalized and he will need to clear COVID-19 protocols passed. However, Brown is likely to make his Bucs’ debut in Week 9 against the Saints.

Rick Stroud reports that negotiations between the Buccaneers and Antonio Brown are “99 percent” done and he’s expected to be reunited with Tom Brady.

Ian Rapoport reports that this is likely to be a two-month rental for the Buccaneers and the belief is that Antonio Brown will sign a one-year contract with “significant upside.”

Rapoport says Brown is expected to sign by the beginning of next week and be ready to play in Week 9 once his suspension is up.

Aaron Wilson of the Houston Chronicle reports that free agent WR Antonio Brown will visit with the Buccaneers on Saturday. 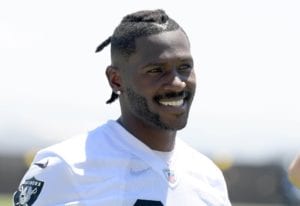 Wilson says both sides are “highly motivated” to get a deal done.

Adam Schefter confirms the news and says Brown and the Buccaneers are working towards an agreement and want to get it done.

According to Schefter, the Seahawks are still in the mix to sign Brown but the Buccaneers have emerged as the favorites.

Schefter adds that Tom Brady has been a driving force behind Tampa’s interest.

Brown had previously made it clear that he wanted to be paired up with Brady in Tampa Bay. However, Bucs HC Bruce Arians consistently downplayed the idea during the offseason.

The Buccaneers have two top receivers in Mike Evans and Chris Godwin. However, both have dealt with injuries and Brady has been a big supporter of Brown since their time together in New England.