Multiple sources have told The San Francisco Chronicle that the A’s expect Oklahoma QB Kyler Murray to declare for the 2019 NFL Draft on Sunday.

While declaring for the NFL draft doesn’t mean he’ll reject the $4.66 million contract he signed with the A’s, it obviously increases the chances of him pursuing an NFL career.

“Contractually, it is not a big deal,” one source with knowledge of the situation tells the Chronicle. “No harm in doing so.”

Murray has an invite to participate in the A’s spring training camp, but the NFL scouting combine is slated for February 26 and he’d obviously need to attend if he’s going to cement his status as a potential top-50 pick.

A source tells the Chronicle that Murray is leaning toward football.

In the event Murray pursues an NFL career, he would have to return his signing bonus and the A’s would not receive a compensation pick in 2019.

Chris Mortensen recently reported that people who know Murray say there is no doubt he loves football more than baseball. Mortensen mentioned that some NFL GMs have said Murray is a first-round projection.

The expectation had been that Murray is going to pursue an MLB career with the A’s after they used a first-round pick on him last year and agreed to a $4.66 million contract. However, there has been increasing buzz about Murray playing in the NFL.

Underclassman have until January 14 to declare for the 2019 NFL draft.

During this three-year college career at Texans A&M and Oklahoma, Murray completed 68.7 percent of his passes for 5,098 yards, 48 touchdowns, and 14 interceptions. He also rushed for 1,369 and 12 touchdowns over the course of 28 games.

We’ll have more regarding Murray as the news is available. 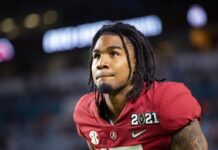