Adam Schefter of ESPN reports that the Bears are releasing WR Ted Ginn Jr on Wednesday. 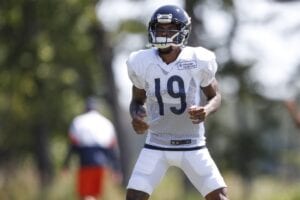 Ginn, 35, is a former first-round pick of the Dolphins back in 2007. He spent three years in Miami and another three years with the 49ers before catching on with the Panthers for the 2013 season.

Ginn later departed for a free-agent contract with the Cardinals but lasted just one year in Arizona before returning to the Panthers on a two-year deal in 2015.

The Saints signed him to a three-year, $11 million contract with $3 million guaranteed in 2017. After finishing out that deal, he joined the Bears this past April.

In 2020, Ginn has appeared in six games for the Bears and caught three passes for 40 yards receiving and no touchdowns. He has also totaled 24 punt return yards.