Sal Capaccio reports that the Bills are restructuring the contract of CB Tre’Davious White in order to create $2.5 million in cap space. 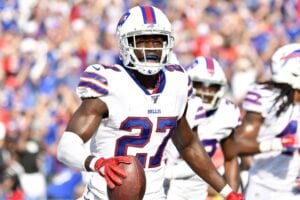 The team was down to $332,000 in remaining cap space following the trade with the Colts for RB Nyheim Hines.

From there, the Bills signed White to a four-year, $70 million extension including $55 million guaranteed. He was set to make base salaries of $9.95 million and $8.6 million for the next two years.

In 2021, White appeared in 11 games and recorded 41 tackles, one tackle for loss, 0.5 sack, one interception, one forced fumble, one fumble recovery, and six pass defenses. Pro Football Focus has him rated as the No. 43 overall cornerback out of 118 qualifying players.