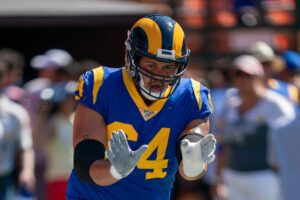 Demby, 26, was taken in the sixth round in 2018 out of Maine by the Rams. The Rams waived him to make room for DT Aaron Donald on their active roster and he was quickly claimed by the Lions.

The Lions elected to waive Demby and later re-signed him to their practice squad. The Rams then wound up signing him back to their active roster.

Demby was waived coming out of camp in 2020 and re-signed to the Rams’ practice squad. He signed a futures deal for the 2021 season.

For his career, Demby has appeared in six games for the Rams and made one start.