Update: Adam Schefter has confirmed the Chiefs and TE Travis Kelce have agreed on a four-year extension worth $57.25 million that keeps him in Kansas City for the next six years.

Kelce will also receive $28 million in guarantees on the new deal.

According to Ian Rapoport, the Chiefs are closing in on a long-term deal for TE Travis Kelce. 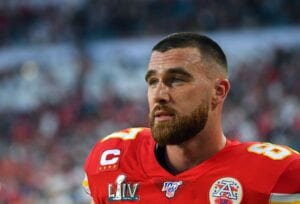 Jeremy Fowler reports the deal will add four years to Kelce’s current contract. Kelce was already under contract with the team through the 2021 season.

This comes just after news broke that the 49ers signed TE George Kittle to a new deal averaging $15 million per season that dramatically shifted the tight end market and provided a marker for Kansas City’s talks with Kelce.

Fowler says Kelce’s deal is expected to come in just under Kittle’s given the age difference, and will be for between $14-$15 million a year and $25 million guaranteed.

Kelce is set to make base salaries of $7.25 million and $7.5 million the next two seasons.

In 2019, Kelce appeared in all 16 games for the Chiefs and recorded 97 receptions for 1,229 yards receiving and five touchdowns. He also rushed for a four-yard touchdown. Pro Football Focus has him rated as the No. 3 tight end out of 67 qualifying players.

We’ll have more on Kelce as the news is available.