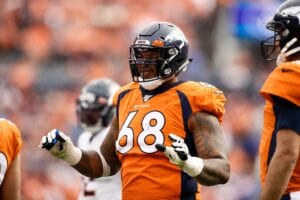 This is notable, considering that RT Ja’Wuan James has opted out of the 2020 season and  Wilkinson could very well end up filling in for James this year at right tackle.

Wilkerson, 25, wound up going undrafted out of Massachusetts back in 2017. He later signed on with the Broncos, but was waived coming out of the preseason and later re-signed to their practice squad.

Wilkerson played under exclusive rights tenders each of the past two seasons before returning to the Broncos on a one-year, restricted tender worth $3.27 million for the 2020 season this pat April.

In 2019, Wilkerson appeared in 15 games for the Broncos and started 12 games. Pro Football Focus has him rated as the No. 59 offensive tackle out of 81 qualifying players.