Ian Rapoport of NFL Media reports that the Broncos have requested permission to interview Rams OC Kevin O’Connell for their head-coaching job. 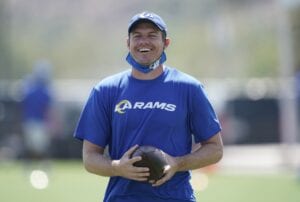 O’Connell, 36, is a former third-round pick of the Patriots back in 2008. After five years in the NFL, O’Connell was hired by the Browns as their quarterbacks coach in 2015.

O’Connell spent one year with the 49ers before Washington hired him as their quarterbacks coach in 2017. He was promoted to passing game coordinator in 2019 and joined the Rams as offensive coordinator in 2020.