Mary Kay Cabot of Cleveland.com reports that the Browns haven’t given up on signing free agent DE Jadeveon Clowney.

The Browns have reportedly opened extension talks with Myles Garrett, but it appears as though that won’t prevent them from being in the mix to land Clowney.

Adam Schefter mentioned last month in an interview with ESPN Cleveland that the Browns have been the “most aggressive” team in terms of their offer to Clowney. However, Schefter explained that Clowney has balked at the Browns’ offer.

“I think they’ve been the most aggressive team with him financially. And, I just think he has balked at going to Cleveland for whatever reason. I think he’s been hesitant to go because if he wasn’t, he would’ve gone already because it’s the most money,” Schefter said, per Jake Trotter. “It’s the richest offer on the table and he hasn’t taken it. So why is that? I don’t know. Is that not wanting to be in that city? Is that a lack of belief in the organization? I don’t know what it is. But there’s no doubt that Cleveland has offered the most money to date. For whatever reason he has not been willing to take it so far. That doesn’t mean that it couldn’t change, but it hasn’t changed just yet.”

Jason La Canfora of CBS Sports recently reports that the word around the agent community is that the “super lucrative” deal Clowney turned down from the Browns was worth $12 million in terms of base value.

Multiple executives tell La Canfora that they could see Clowney getting around $8 – $10 million per year at this point in free agency.

Mark Berman reported that the Browns, Seahawks, Ravens, Titans, and Eagles are among the teams expressing interest in Clowney.

Clowney was looking for around $20 million per year this offseason, but has reportedly moved closer to $17-$18 million a year.

In 2019, Clowney appeared in 13 games for the Seahawks and recorded 31 tackles, three sacks, an interception, two defensive touchdowns, four forced fumbles, two recoveries and three pass defenses. Pro Football Focus has him rated as the No. 20 edge rusher out of 108 qualifying players.

We have him featured in our Top 100 Available 2020 Free Agents list. 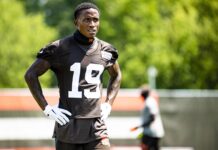 186,429FansLike
7,623FollowersFollow
275,817FollowersFollow
© NFLTradeRumors.co is an independent news source and has no affiliation with the National Football League (NFL), NFL.com, or any team(s).
wpDiscuz