According to Aaron Wilson, the Buccaneers brought in LBs T.J. Brunson and Leon Jacobs for workouts on Wednesday. 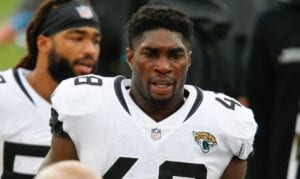 Jacobs, 26, is a former seventh-round pick of the Jaguars back in 2018. He was entering the final year of his four-year, $2.55 million contract when Jacksonville cut him loose in July of last year.

He appeared in three games in 2020 before missing the rest of the year with a torn ACL.

For his career, Jacobs has appeared in 29 games for the Jaguars and recorded 56 tackles, two sacks, a fumble recovery and a pass defense.