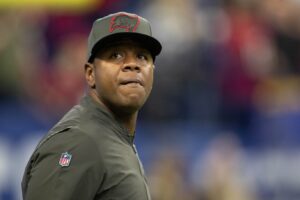 Jacksonville has a follow-up interview with Leftwich scheduled for Wednesday and Wilson says he has been reaching out to potential staff members.

Wilson adds that Leftwich’s staff with the Jaguars could include Buccaneers outside linebackers coach Larry Foote and receivers coach Kevin Garver if he gets the job.

According to Mark Maske, there are “increasing hopes” that a deal will be in place soon between the Jaguars and Leftwich regarding their head-coaching job. However, Maske adds that nothing is official or certain yet.