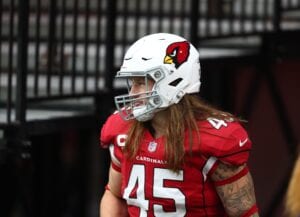 Gardeck, 26, signed with the Cardinals as an undrafted free agent out of Sioux Falls in 2018. He made the final roster each of the past three seasons and after a breakout performance in 2020 he was placed on injured reserve in December.

Arizona re-signed Gardeck as a restricted free agent this offseason to the second-round tender, which is worth $3.384 million for the 2021 season.

In 2020, Gardeck appeared in 14 games for the Cardinals recording 16 tackles, one fumble recovery and seven sacks.

Melvin Ingram Wants Out Of Pittsburgh, Chiefs Have Made Trade Offer For Him