Ian Rapoport of NFL Media reports that the Chargers are expected to start rookie QB Justin Herbert for Week 3’s game against the Panthers. 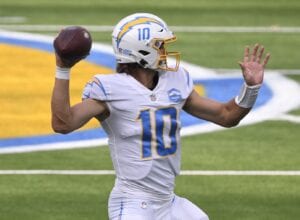 Tyrod Taylor had his lung punctured while being administered a pain killer before last Sunday’s game for a rib injury he was dealing with. Unfortunately, Taylor’s lung was punctured and he was taken to the hospital.

It makes sense that the Chargers would start Herbert in Week 3 and give Taylor enough time to ensure he’s fully recovered.

Adam Schefter says that doctors advised Taylor not to play “indefinitely” due to his punctured lung. The Chargers were hoping Taylor would be able to start Sunday, but doctors are reportedly against it.

The contract includes a fifth-year for the Chargers to pick up for the 2024 season.

In 2020, Herbert has appeared in one game and completed 22 of 33 pass attempts (66.7 percent) for 311 yards, one touchdown and an interception. He also rushed for 18 yards and a touchdown.