Troutman appeared to have a knee or leg injury, but it was later announced that he left the game with an arm injury.

Last year, Troutman appeared in 15 games for the Chargers, but wound up being placed on season-ending injured reserve with knee and ankle injuries in late December. Pro Football Focus had him rated as the No. 77 guard out of 78 qualifying players last year. 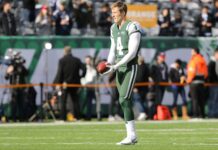 187,480FansLike
7,623FollowersFollow
275,520FollowersFollow
© NFLTradeRumors.co is an independent news source and has no affiliation with the National Football League (NFL), NFL.com, or any team(s).
wpDiscuz