Per the NFL’s transaction wire, Chargers LB Kyzir White has been placed on injured reserve. 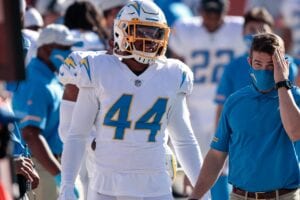 White, 24, is a former fourth-round pick by the Chargers in the 2018 NFL Draft. He’s in the third year of his four-year, $3.1 million rookie contract.

In 2020, White has appeared in 11 games for the Chargers and recorded 77 total tackles, four tackles for loss, 0.5 sacks and three pass defenses.