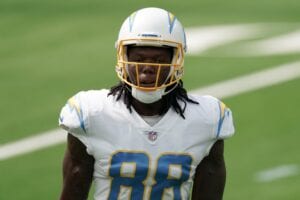 However, the Chargers also placed Groy on the COVID-19 list after he tested positive this morning.

Green, 32, is a former seventh-round pick by the Broncos of the 2011 NFL Draft. He finished his four-year rookie contract before re-signing with Denver on a three-year deal.

From there, Green signed a three-year, $8.6 million contract with the Chargers in 2018 and is currently in the final year of his contract. He’ll make a base salary of $2.7 million for the 2020 season before becoming an unrestricted free agent next year.

In 2020, Green has appeared in six games for the Chargers and caught three passes for 50 yards receiving and one one touchdown.