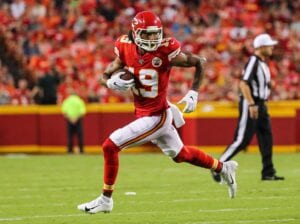 Kemp, 26, was signed by the Chiefs as an undrafted free agent out of Hawaii in 2017. He was waived during final cutdowns in 2017 and bounced on and off the Chiefs practice squad before being signed to the active roster early in 2018.

He returned to Kansas City on two consecutive one-year contracts. He had a brief stint with the Dolphins before returning to the Chiefs’ practice squad. He re-signed with the team for the 2021 season.

In 2021, Kemp has appeared in 10 games for the Chiefs and recorded two receptions on three targets for 24 yards and no touchdowns. He’s also recorded eight total tackles on special teams.