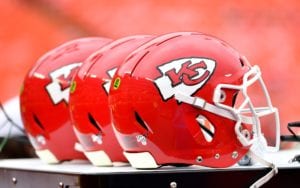 Dieter, 27, wound up signing on with the Chiefs as an undrafted free agent out of Alabama back in 2017. He was waived coming out of the preseason and spent the year on the Chiefs’ practice squad.

Kansas City brought Dieter back on a futures contract each of the past two years.

For his career, Dieter has appeared in 10 games for the Chiefs and caught two passes for 32 yards receiving and no touchdowns.

Pederson, 24, wound up going undrafted out of Louisiana-Monroe this past April. He later signed on with the 49ers as an undrafted free agent.

However, San Francisco opted to waive Pederson and he caught on with the Saints back in August for just one day. He later signed a futures contract with the Chiefs.

Josh is the son of Jaguars’ new HC Doug Pederson.

During his college career at ULM, Pederson caught 99 passes for 1,191 yards receiving and 11 touchdowns over the course of four seasons and 35 games.