Zak Keefer mentions that the Colts could finalize a deal to sign OT Julie’n Davenport in the coming days. 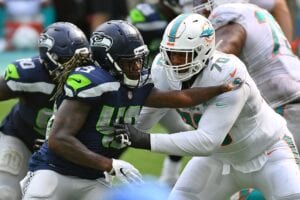 Indianapolis hosted Davenport for a visit in recent days, so this isn’t a big surprise.

Davenport, 26, is a former fourth-round pick of the Texans back in 2017. He was traded to the Dolphins as part of the Laremy Tunsil back in 2019.

Davenport played out the final year of his four-year, $2.986 million contract and is testing the open market as an unrestricted free agent this offseason.

In 2020, Davenport was active for 16 games, making one start for the Dolphins.