According to Jim Ayello of the Indianapolis Star, the Colts are signing DT Grover Stewart to a three-year, $30.75 million extension on Saturday. 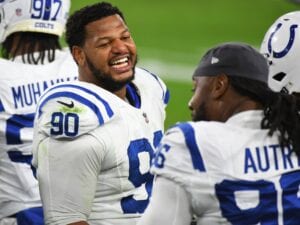 Stewart has been in the middle of a breakout season along Indianapolis’ defensive line. He recently credited shedding 37-pounds over the offseason towards his increased playing time in 2020. (NFLTR)

In 2020, Stewart has appeared in 10 games and recorded 36 total tackles, four tackles for loss, and no sacks.