Ian Rapoport of NFL Media reports that the Cowboys have made it known that veteran DE Everson Griffen is available in a trade ahead of next week’s deadline. 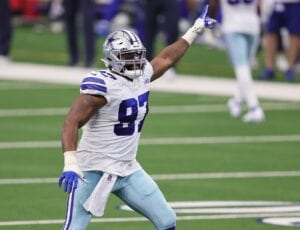 Rapoport mentions that Griffen is owed around half of his $6 million salary for the 2020 season.

The Cowboys season clearly hasn’t gone as they had hoped and it appears as though they’re willing to listen to offers for some players.

Before he signed with the Cowboys, the Seahawks, Vikings, Cardinals and Packers reportedly expressed at least some interest in him.

Griffen, 32, is a former fourth-round pick of the Vikings back in 2010. He signed a six-year, $75 million contract that includes $34 million guaranteed in 2017, but the Vikings declined to pick up his option back in February, which allowed him to become a free agent.

The Cowboys signed Griffen to a one-year, $6 million contract a few months ago.

In 2020, Griffen has appeared in seven games for the Cowboys and has recorded 20 tackles, 2.5 sacks and a forced fumble.

We’ll have more regarding Griffen as the news is available.