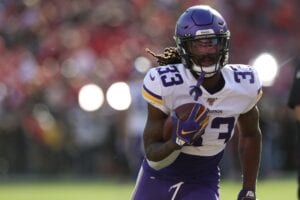 The plan is for Cook to undergo an MRI on his injured shoulder Monday to determine the severity of the issue.

Cook has dealt with a myriad of injuries this season, however, this may be the most serious. Vikings RB Alexander Mattison figures to step into the lead back role if Cook does in fact miss time.

Entering today’s game, Cook had appeared in eight games for the Vikings, picking up 734 yards on 161 carries, and four touchdowns. He’s also added 21 receptions for 138 yards. Cook has fumbled twice on the season, losing one.