Ian Rapoport reports that the Dolphins have requested an interview with Saints DB coach and co-DC Kris Richard for their vacant defensive coordinator position. 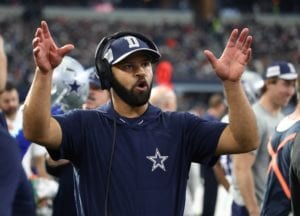 Richard is a co-defensive coordinator with Saints DL coach Ryan Nielsen, who has also drawn interest during this coaching cycle.

Richard, 43, began his coaching career with the Seahawks back in 2008 as a graduate assistant. He worked his way up to defensive in 2015 and spent three seasons in charge of the Seahawks’ defense before parting ways in 2017.

We will have more on the Dolphins’ defensive coordinator search as it becomes available.