According to Ian Rapoport, the Eagles have received trade inquiries for OT Andre Dillard after his stint in the starting lineup the past few weeks. 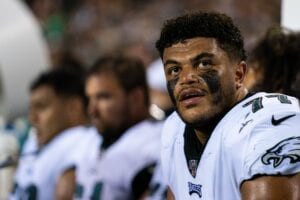 With Jordan Mailata healthy and Lane Johnson set to return after a mental health-related absence, Dillard is the odd man out at offensive tackle.

Rapoport notes Philadelphia has been giving him some reps at guard but given Mailata and Johnson are under contract through the end of Dillard’s rookie deal, his best value to the Eagles could come as a trade chip, especially because his tape from the past few games has been solid.

He adds Philadelphia won’t give Dillard away and is believed to be asking for a quality Day 2 pick in return for the former first-round pick.

Dillard, 26, was drafted by the Eagles in the first round out of Washington State in 2019. He is in the third year of his four-year, $12.371 million rookie deal.

The deal includes a fifth-year option for Philadelphia to make a decision on in 2022.

In 2021, Dillard has appeared in six games for the Eagles and made four starts at left tackle. Pro Football Focus has him rated as the No. 27 tackle out of 79 qualifying players.

We’ll have more on Dillard as the news is available.