According to Ian Rapoport, the Eagles have given TE Zach Ertz permission to seek a trade with other teams. 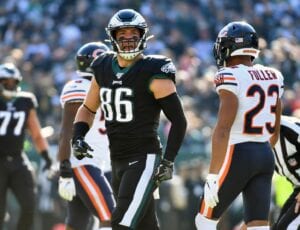 Philadelphia reportedly has multiple teams interested in Ertz but none have been willing to give up a third or fourth-round pick to get the veteran tight end.

According to Mike Garafolo, the Eagles continue to maintain they’re not in a rush to trade TE Zach Ertz as they continue to hold out for better draft compensation.

Ertz came up as a potential trade option leading up to the deadline last year with the Ravens and Packers being linked to him. However, no deals surfaced due in part to Ertz being injured.

In 2020, Ertz appeared in 11 games for the Eagles and caught 36 passes for 335 yards receiving and one touchdown.

We’ll have more regarding Ertz as the news is available.