Tom Pelissero reports that the Falcons are bringing in LB Nick Kwiatkoski for a visit on Thursday. 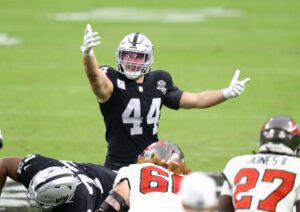 Pelissero mentions that Kwiatkoski has two other visited scheduled and should be expected to sign with a team in the near future.

In 2021, Kwiatkoski appeared in 8 games for the Raiders and recorded 21 tackles.