Ian Rapoport reports that Falcons S Keanu Neal is believed to have a torn Achilles.

The plan is for Neal to get an MRI on Monday to confirm, but it’s likely that this will be a season-ending injury.

Rapoport says Neal should be ready in time for the start of the 2020 season.

The Atlanta Falcons announced that S Keanu Neal suffered an Achilles injury during Sunday’s game against the Colts.

Keanu Neal has suffered an Achilles injury and will not return.

Ito Smith will not return with a concussion. #ATLvsIND

Neal, 24, is a former first-round pick of the Falcons back in 2016. He was entering in the fourth year of his four-year, $10,737,644 contract when the Falcons picked up his fifth-year option this past April.

Entering today’s game, Neal had appeared in two games and recorded 10 tackles and no interceptions for the Falcons.

We’ll have more regarding Neal as the news is available. 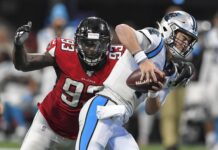