Taylor recently tried out for the Vikings but was signed to a contract following the session.

Unfortunately, the Giants cut him loose coming out of the preseason.

In 2016, Taylor appeared in all 16 games and recorded 28 tackles, 4.5 sacks, a forced fumble, a safety and a pass defense for the Lions. Pro Football Focus has him rated as the No. 108 edge rusher out of 109 qualifying players.

We have Taylor featured in our Top 50 Available Free Agents list. 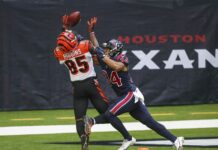