According to Field Yates, the Giants have placed OT Matt Gono on the exempt/left squad list on Wednesday. 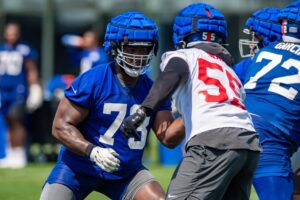 Gono, 26, signed with the Falcons as an undrafted free agent out of Wesley College in 2018. He signed a three-year, $1.71 million contract and made Atlanta’s roster each of his first three seasons.

The Falcons tendered Gono at the second-round level as a restricted free agent in 2021. He made a base salary of $3.384 million before being waived earlier this offseason after missing the entire 2021 season with a neck injury.

Gono signed on with the Giants back in March.

In 2020, Gono appeared in all 16 games for the Falcons and made four starts.