The New York Giants announced Sunday that they’ve signed K Graham Gano to a contract extension through the 2023 season.

We have signed Graham Gano to a contract extension through the 2023 season. #TogetherBlue

Gano, 33, originally signed on with Washington as an undrafted free agent out of Florida State back in 2009. He spent three years in Washington before signing on with the Panthers for the 2012 season.

Entering today’s game, Gano had appeared in nine games for the Giants and converted 19 of 20 field goal attempts to go along with all 13 extra point tries. 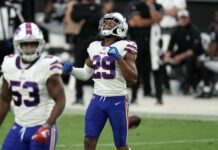 187,532FansLike
7,623FollowersFollow
275,804FollowersFollow
© NFLTradeRumors.co is an independent news source and has no affiliation with the National Football League (NFL), NFL.com, or any team(s).
wpDiscuz