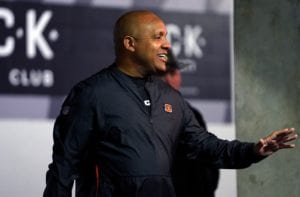 Among many troubling allegations in a lawsuit filed yesterday, Flores says Dolphins owner Stephen Ross offered him $100,000 for every loss in 2019 as Miami tried to tank for the No. 1 pick.

Jackson implied in a series of tweets that he was also offered money to lose games by owner Jimmy Haslem.

Kimberly Diemert, who is the executive director of the Hue Jackson Foundation, claims they have records that prove Haslem paid Jackson, executives Sashi Brown, Paul DePodesta and Andrew Berry to lose games.

In other tweets, Diemert says she and Jackson raised this issue to the NFL but were leveraged into a gag order during arbitration.

Robinson confirms Jackson had a confidential fraud grievance against the Browns in 2018 as a result of his firing which was settled by an arbitrator, as is NFL policy. The arbitrator ruled against Jackson but that is not considered a definitive determination of fact legally.

Robinson adds Jackson has materials and is willing to testify, saying he’s reached out to Flores to arrange a meeting soon.

Jackson tweeted this morning: “I stand with Brian Flores. I can back up every word I’m saying.”

The Browns denied the allegations in a statement: “The recent comments by Hue Jackson and his representatives relating to his tenure as our head coach are completely fabricated. Any accusation that any member of our organization was incentivized to deliberately lose games is categorically false.”

Jackson, 57, began his NFL coaching career back in 2001 as the Washington RBs coach. He worked for the Bengals, Falcons and Ravens before he was hired by the Raiders as their offensive coordinator in 2010.

The Bengals hired Jackson as a special assistant to Marvin Lewis before parting ways with him in 2019. Jackson signed on to become the head coach at Grambling State in 2021.

We’ll have more on the situation with Flores, Jackson and the NFL as the news is available.